Our weekly community café “morethan” (which usually meets on Fridays in the Methodist Hall) moved to zoom very quickly and for many, this opportunity to chat every week has been a real lifeline.

But as the weeks turned to months, we become more and more aware of people struggling financially as well as emotionally. Redundancy, furlough, and reduced opportunities have all played their part and by December we were wondering how we could help more practically.

I was introduced to a lady in Garforth who had been distributing The Real Junk Food Project food boxes from her garden. TRJFP rescues surplus food from going to landfills and distributes them as a grocery box for £10 from their warehouse in Stourton. It’s full of fruit, vegetables, tinned and dry items and even some treats such as cakes and chocolate.

All of the food is safe to eat, but some might be past its best before date or unable to be sold for some other cosmetic reason. One customer calculated that his box would have cost over £30 to buy in a supermarket. So we discovered that we were not only benefitting the environment but also saving money!

Initially, I just collected boxes for those I knew through “morethan” or our churches. We also began to buy a few spare boxes for those who were struggling financially. Gradually, a few people began to make additional donations so that we could subsidise more boxes for those who couldn’t afford to pay the full amount. Word began to spread and we now have around 20 people who regularly order a box.

Everyone loved the boxes so much, we really wanted to make them more widely accessible. In March we began to invite people to collect their boxes from a central point at the Methodist Church hall. This has gone well so far with the team of volunteers ensuring everyone abides by the relevant Covid guidelines. We are now in a position to start advertising them to the public soon after Easter.

To order a box, donate, or volunteer, please contact

Andy Atkinson by email at ccfoodboxes@gmail.com or via www.facebook.com/ccfoodparcels. Alternatively, drop in at the hall on Tuesday afternoons, 1.30-2.30pm. 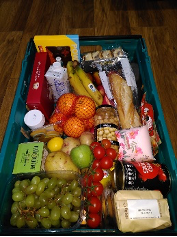