Objector Film viewing and Q & A : Ending the Israeli Occupation one soldier at a time (under 35s)

Atalya Ben Abba is one of a growing number of Israeli young people who are refusing to serve in the army because of the occupation of Palestine.  The film follows her story.  She grew up in a military family in Israel, and at 17 started to discover more about effect of the occupation on Palestinian people. She then went to military prison for her refusal to be conscripted and is now a peace activist.  If you have questions about what is happening in Israel/Palestine come along to this event organised by Sabeel-Kairos, a Christian charity working for peace and justice in Israel/Palestine !  Watch the film for free before the event when you sign up, then come to the live zoom Q & A with Atalya herself on Monday 14th June at 7.30pm. An under 35s event. 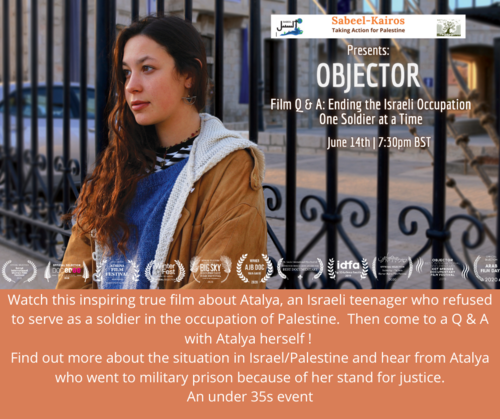